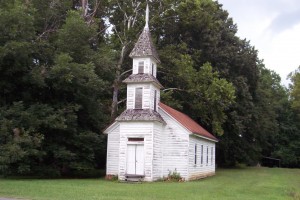 The names and places of the following story have been changed to protect the innocent.  It is based on a true story; as far as you know.

It was Thursday Evening; the 4th and final night of our New Life Revival Week.  It had been a great Revival, with many parishioners showing up each session.  We had an average increase of 20 new people arriving each evening.  I had told my wife we were going to go out and eat before the service tonight, because I didn’t want to worry about anything except getting to the church early and getting a good seat.  God had really been moving in my life this week.  Little did I know that on this night, God moving was not going to be the most pressing movement I would face.

A Bit of History

I was first diagnosed with IBS 2 years ago when I experienced a rash of stomach upsets that were getting progressively worse.  I went through all the normal things one would do before you begin to suspect that there is something seriously wrong.  I tried:

Nothing seemed to work and the symptoms were getting more intense almost daily.  I was started having to literally plan ahead for potential gastronomical incidents.  I suffered:

What started as a mild annoyance and discomfort, was fast becoming a major pain; literally and figuratively.

I eventually went through the multitude of tests that one has to go through to get an official diagnosis of Irritable Bowel Syndrome (IBS).

I had every possible orifice poked, prodded, and “explored”.  (Explored doesn’t quite do justice to what happens to you during these tests. . . try stared at, washed out, invaded, roto-rooted, photographed, stared at again, and finally talked about extensively.)  When these “tests” were done, my doctor knew me in ways my wife didn’t.   I’m not sure, but if I had described them to the Revival Pastor we were going to listen to, he would have tried to convert me in some way.

Anyway, suffice to say, getting a doctor to pronounce a diagnosis of IBS can be a very “involved” process, even somewhat Biblical.

OK, back to the story.  Here I am two years after my diagnosis, and I have managed to get my IBS under control.

All the above have given me a new found confidence to live my life normally again . . . Ever heard that old saying, just when you think you’ve got a problem  licked, that’s when it comes back to bite you in the behind.  Well my friends, that aphorism was about to come true for me in an anatomically correct way. Mexican food was about to bite me back, and all I could do was pray for a miracle.

“And when the roll is called up yonder, I’ll be there.”

My body was starting to “call its roll” and my bowels were about to answer in a big way.  I started to notice the beginnings of an old familiar feeling deep within me.  The feeling of impending gastrointestinal doom was starting to weigh heavy on me, well my colon.

“Just as I am without one plea.” 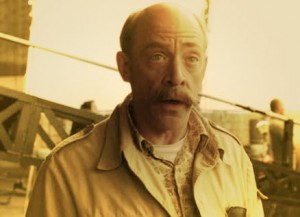 If you’ve ever felt it, you know this face!

“Oh Lord, I’m pleading, please make this go away.”  There were other pleas being made at the same time.  My insides were pleading for me to let this beast out!  I started to sweat so bad that my wife asked me if I was OK.  When she saw that familiar look of the coming juggernaut, she mouthed, “You should go.”  When I turned and looked directly at her she screamed, “Run!”

Now I’ve been in this situation before and history is not kind to me concerning this matter, but I was caught up in the spirit, and determined that my devil of a jejunum wasn’t going to win.  I was going to suffer as the saints of old, and come out gloriously on the other side of tribulation.

At this point I want to point out what a poor choice of words “come out,” turned out to be.  At the very moment when my resolve solidified, my bowels went in another direction.

“Have thine own way Lord”

Oh Lord, my rectum is having its own way, and that way is Exodus!  To say that my kids were embarrassed about what happened next is not quite the right way to put it.

My entire family saw me jump up, and they instinctively pulled their legs up out of the way.  Ms. Carroll sitting beside my wife however, apparently didn’t get the memo, and as I leaped over her outstretched knees, I let loose with a flurry of what can only be called musical malfeasance which caused Ms. Carroll to jerk her head so hard to the side that she was diagnosed with pinched nerves and whiplash.  I can’t really say anything more about that as the lawsuit is still pending.  (“Do you promise to tell the truth, the whole truth, and nothing but the truth Mr. Trundle?”  Do I have to?)

“We’ll sing and shout the victory.”

As I hit the aisle running, my bowels began to sing and shout the victory they were currently enjoying.  Apparently several children giggled and several others have to see a counselor now.  The Reverend Parker had to stop the service as everyone recovered from what they had just seen.  I’m told his next words were, “Let us pray.” 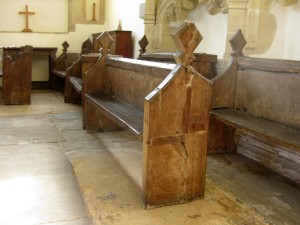 The scene of the crime.

That’s how I take my IBS life now.  One day at a time.  I now know that getting cocky with your intestines is a “no win” situation.  With IBS, you have to watch what you eat all the time, every time.  If not, you could end up with your own horror story.

The folks at New Life Church have since forgiven me for my malodorous sin in their virtuous sanctuary, and have even reserved a place in the front pew for me; pew being the operative word in that sentence.

My children have dropped their Emancipation Suit against me, with the conditions that I keep up my food journal, and never . . . under any circumstances . . . “no dad we’re not kidding” . . . sit by or acknowledge them as my relatives ever again, while at the church.

I would be willing to bet that each and every one of us that suffers from IBS has our own horror story.

Just realize that there is help and support out there for you, and you’re not alone.

So the next time you see a panicked man run from the auditorium screaming out both ends, cut him some slack, and definitely lift your knees so he can get by.  Trust me, it’s urgent.